And thus it came to pass that Cracked Science was no more.

This is not a dead-end; the road, once gravely, makes way for a paved highway.

In the summer of 2013, a former graduate student with a craving for bad-science denouncing and public education started a blog.

There are over 150 million blogs on the Internet.

His was not so much a lone voice in the wilderness as a rookie trader on the floor of the world’s biggest stock market.

He wrote and wrote and wrote, on science education, science criticism, and straight-up pseudoscience, somewhat aimless at first but driven by sheer exuberance.

When words were not enough, he dusted off his lenses. He spent two hours in an indoor pool with the fan turned off to talk about homeopathy and bought 200 styrofoam cups to prove his point. The whereabouts of these cups are unknown.

He rolled his blog into a brand-new production team that he created to bring reason to the public. He started a podcast. He interviewed a cardiologist and budding medical journalist. They thought, “one voice is fine but two voices are better.” Especially when they bicker.

Cracked Science was a first trial for me, an experiment, and it was fun. But I am now taking the skills I developed blogging, podcasting, and making videos to a single destination: The Body of Evidence.

CrackedScience.com will remain active for the foreseeable future, but no new material will be posted there.

If you want to see my videos, if you want to read me (including an all-new post on the science behind Chewpods, that chewable natural health product that’s being plastered on the walls of our metro stations), if you want to hear my lovely voice, there’s one destination for that, and that’s www.bodyofevidence.ca.

Plus, you get to read, see, and hear my buddy, Dr. Christopher Labos, so it’s a two-for-one deal, really. Click on our pretty faces below. You’ll be taken to the new site, of which we are immensely proud. Enter your email address in the “Subscribe” box on the right and you won’t miss a thing.

And I promise: I will never give you Ewoks. 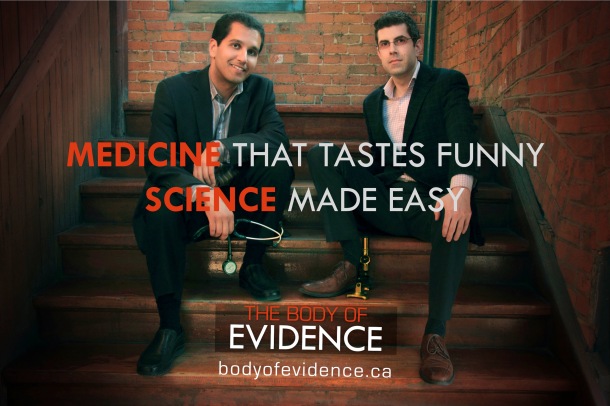