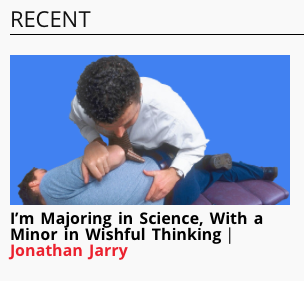 The infiltration of pseudoscience in academia, either universities proper or academic health centres, is very real. Dr. David Gorski is doing a great job reporting on the American side of this disturbing inroad, but I thought it was time to tackle the Canadian (and more specifically the Quebec) perspective.

The Prince Arthur Herald recently published an article of mine entitled “I’m Majoring in Science, With a Minor in Wishful Thinking”. You may be surprised to learn that chiropractic, reflexology, and acupuncture have all made forays into academia in Montreal.

“What used to be a shibboleth—a phrase such as “evidence-based”—is now commonly used by quackademics as a smokescreen to deceive funding agencies, the general public, and perhaps the quackademics themselves. Everyone is engaging in “evidence-based practice”. The phrase has stopped to carry the meaning it once had and now serves as a fashion rule. If you don’t put “evidence-based” in front of what you practice or research, you will not be taken seriously. The critical assessment of the evidence that used to follow is no longer a requirement.”

You can read the full article here.

I would also encourage you to post it on social media and to comment on it. My last article for the Herald elicited a number of irrational comments from the hardcore believers in the power of sugar pills. Let’s hear it for rationality.

One thought on “I’m Majoring in Science, With a Minor in Wishful Thinking”