So, my beautiful baby girl is almost a year old.

We’re so proud. But, you know what, we put our foot down with our paediatrician who wants our beautiful, healthy baby girl to get her MMR (measles-mumps-rubella) shot.

My girlfriend and I both know that vaccines have been linked to autism. That’s why we skipped that other one when she was younger.

Yeah. Just more poison in the blood of children everywhere. You know they put mercury in these? How f&%#ing irresponsible do they have to get?

Let me first take a deep breath before answering you.

Where did you get this information?

It’s all over the Internet.

So are miracle cures for sex impotency and remedies against ageing that have dermatologists angry at the little old women who discovered them. The whole of the Internet is not a medical encyclopedia. You have to be careful about the sources of this information.

Jenny McCarthy’s son got autism because of the vaccine the doctors gave him.

First off, while Jenny McCarthy began nursing studies many years ago (and never completed them due to lack of tuition money), she is not a medical professional. This is the same woman who, before accepting a diagnosis of autism for her son, believed him to be a Crystal Child and her, an Indigo Adult.

Exactly. You can look up that supernatural New-Agey nonsense on Wikipedia if you’d like. People like Jenny McCarthy and J.B. Handley, with whom she joined forces, are looking for someone to blame. Instead of raising money for researchers to identify the true causes of autism, they do something much easier: give way to their fears and paranoid conspiracy theories. They commit every logical fallacy in the book. They mistake correlation for causation (e.g. my son started behaving weirdly after he got his MMR shot). They attack the people who argue against them (e.g. “NBC’s pharma-whore in residence”, an actual quote from Handley referring to a pro-vaccine doctor who had appeared on The Today Show). They argue that the “masses” must be right because there is truth in numbers (e.g. the masses are right and the scientific elite, only interested in profits, is wrong).

People like Handley and McCarthy are damaging the public’s health by spewing refuted nonsense about the intervention that has “saved the lives of more babies and children than any other medical intervention in the past 50 years”1.

But isn’t there any link at all between vaccines and autism?

No. The infamous scientific paper which proposed a potential mechanism by which the MMR vaccine could have caused autism in eight children was written by Andrew Wakefield and twelve other authors. It was published by The Lancet in 1998. It was subsequently retracted by the journal in 2010. The intervening story is fascinating:

As you can see, this whole story only amounts to bad science and corruption, not government conspiracies.

OK, but what about the mercury? I heard they put mercury in those vaccines. I mean, I’m all for immunizing my baby girl, but I don’t want to give her mercury! That’s poison! That’s why they got rid of all those mercury thermometers!

“Poison” is a relative term. As the saying goes, “it’s the dose that makes the poison”. Did you know that water is a poison? If you drink too much of it, it will dilute the sodium out too much. You could seize up and die. A better question would be, how much mercury is poisonous? The best question, however, would be how much thiomersal is poisonous? You see, the mercury involved in vaccine production is part of a carbon-based molecule called thiomersal or thimerosal, depending on where you live. It kills bacteria and fungi and thus prolongs the shelf-life of vaccines or, at least, it used to before it was removed from the manufacturing of certain American vaccines in 2001. Why? Because the American Academy of Pediatrics and the Centers for Disease Control and Prevention worried that maybe children were getting too much mercury from their vaccines.

Ah ha! So the government finally admitted they had screwed over the little people!

Hardly. This rash new measure did light the fire of the anti-vaccination camp: it basically looked like an admission of guilt. This thiomersal-autism debate ended up in court through the Omnibus Autism Proceeding, the verdict of which was issued in 2009. The conclusion? There was not a shred of evidence (from the mountain of evidentiary records) showing that a) children who received vaccines containing thiomersal had a higher incidence of autism or that b) thiomersal caused autism. Since then, more research has been done into the toxicological profile of thiomersal in the body. We now know, using data from both monkeys and humans, that any thiomersal included in the first vaccine is cleared from blood and brain tissue mainly through faecal excretion before the second vaccine is administered two months later3. It is important to distinguish between the toxicological profile of “ethyl mercury”, which is contained in thiomersal, and “methyl mercury”, which is not, as the latter is more toxic than the one. It is easy to get mixed up and show alarming data from the other to prove that the one is a much more persistent compound in the human body than it really is.

All right. I guess that makes sense. But still… I guess I’m still a little bit afraid that this vaccine is somehow going to screw up my child. What’s the worst that can happen if I don’t get her vaccinated?

Our Québec motto is “Je me souviens” (“I Remember”) but “Je ne me souviens plus” would perhaps be a more accurate maxim, for the whole of humankind, even. When we’ve outraced the red-toothed predator, we tend to forget it was ever a menace. Vaccines were created for a reason, and that reason is not so pharmaceutical companies could make billions of dollars while poisoning the public (there is little money to be made from shots that are only required once or twice in your life, especially when angry parents are suing you because their children have autism and they blame your vaccine). The reason is that, a long time ago, before you were born, there were terrible diseases that incapacitated and killed a large number of children. 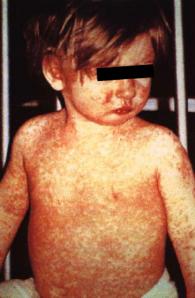 Child with measles (from the Centers for Disease Control)

Measles causes a distinctive body rash. Complications include pneumonia, acute inflammation of the brain, and ulcers of the eye’s cornea. It used to infect 4 million American children and kill 500 every year. 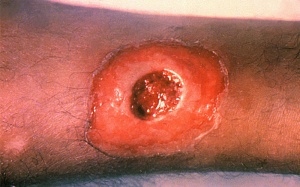 Diphtheria skin lesion (from the Centers for Disease Control)

Diphtheria causes fever and sore throat. It can lead to an inflammation of the heart muscle and damage to the nerves of the peripheral nervous system. It used to kill 12 000 American children ever year. 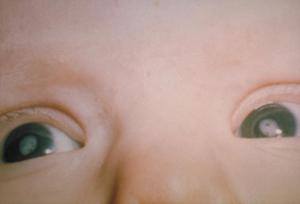 Cataracts from rubella (from the Centers for Disease Control)

Rubella looks like the flu and also results in a rash. Up to 20 000 babies in the United States used to be born blind, deaf, or mentally-challenged every year because of it. 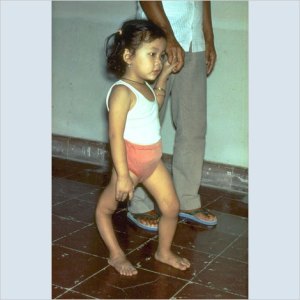 Polio (from the Centers for Disease Control)

Polio used to result in 15 000 cases of permanent paralysis every year in the U.S and a thousand deaths.

We have forgotten some of these diseases because vaccines have been so successful at keeping them at bay. As a result of the contemporary anti-vaccination movement, however—because of rash fear, irrational accusations, and conspiracy theories—some of these diseases are coming back. We used to see on average zero to four cases of measles in the entire province of Québec every year. In 2011, that number skyrocketed to 7764. The average age of these patients? 15. While no one died, 27 of these cases developed pneumonia. 79% of all infected individuals had not been, could not be, or could not remember if they had been vaccinated against measles.

Children who cannot get vaccinated—because they are newborns, they are undergoing chemotherapy, they take steroids against asthma, they are immunosuppressed in anticipation of a life-saving transplant—rely on the immunity of the “herd” to protect them. When the majority of people are vaccinated against a disease, it becomes difficult for the infectious agent to jump from one person to the next. By refusing vaccination due to irrational fears, you are contributing to the resurgence of deadly diseases on which we spent countless dollars to eradicate.

Please get your children vaccinated. Consult the Public Health Agency of Canada for medically accurate, scientifically valid information and stop listening to actors who say, “if you ask a parent of an autistic child if they want the measles or the autism, we will stand in line for the fucking measles”5.

There are consequences to misinformation on matters of public health, which is why a post-production producer created the website “Jenny McCarthy Body Count” (now renamed “Anti-Vaccine Body Count” to include the likes of Barbara Loe Fisher, Jim Carrey, J.B. Handley, Jessica Alba, Matthew McConaughey, Bill Maher, and many more, who are all using their status to give voice to irrational fears). At the time of this writing, the counter of preventable deaths had reached “1299”.

2. Offit. Paul A. Deadly Choices: How the Anti-Vaccine Movement Threatens Us All. New York: Basic Books, 2011.

2 thoughts on “Take Your Vaccinatin’ Paws Off Me, You Damn Dirty Doctor!”