Did you know that over 73,000 American soldiers who fought during World War II are still missing in action1? These are Armed Forces personnel who were sent by their government to fight a war but who never came back. They became prisoners of war (POWs) or were listed as missing in action (MIA). 1,643 U.S. soldiers sent to fight the Vietnam War are still unaccounted for; for the Korean War, that number goes up to 7,903. While these figures may seem unreasonably high for someone unfamiliar with armed conflicts, here’s an even more unreasonable number: 50 million U.S. dollars.

This is the operating budget of JPAC, the Joint POW/MIA Accounting Command, which is tasked with bringing these soldiers home2. This article will not be a tirade against the substantial funds that are used to bring back bits of bone and cracked dog tags to family members. Many people would argue that the U.S. government, given the high cost of its healthcare services (which is decreasing) and the state of its education system (which is sorely deficient when compared to developed nations), would be better off distributing these resources elsewhere.

Rather, I want to look at the science of how a piece of bone that has been buried in damp soil for 60 years can yield enough DNA to help in identifying the individual in whose skeleton it once belonged.

It seems like an impossibility. As we have seen before, DNA is present in the nucleus of most cells. While the length of this molecule is staggering, every bit of information is only present in two copies and each copy can be slightly different since one comes from your mother and the other, from your father. Given this low number of copies, nuclear DNA rapidly degrades beyond recognition after death. Molecular scissors known as “nucleases” are released from inside cells and start chopping up the DNA; bacteria, fungi, and insects have a field day with the remains; and ultraviolet radiation from the Sun introduces bends and kinks in the DNA molecule which will cause problems for scientists down the road. If nuclear DNA is so easily damaged, how can DNA be used to identify World-War-II-era soldiers?

The answer lies in a heretofore unmentioned DNA molecule: mitochondrial DNA. You see, we constantly hear about nuclear DNA on television and in books, but a little known fact is that cells contain more than one genome. If a cell looks like an egg being fried, with the “nucleus” being the yolk and the “cytoplasm” being the egg white, mitochondrial DNA (or mtDNA) is found in the egg white. It is not freely swimming around the cell’s cytoplasm but is rather contained in tiny structures known as “mitochondria” (singular form: mitochondrion). 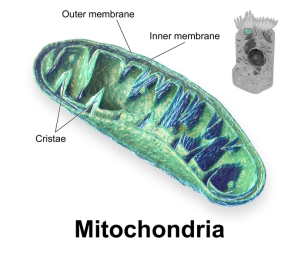 A mitochondrion by Bruce Blaus. Available on Wikipedia.

These mitochondria are the powerhouses of the cell, the structures that generate the energy each cell needs. For the purposes of identification, mitochondria are fantastic for two reasons: each mitochondrion contains DNA and each cell can contain multiple mitochondria. The exact number of mitochondrial genomes housed in each human cell is subject to variation according to cell type: a 1988 scientific paper calculated a mean of 800 mtDNA molecules per human lung fibroblast, a type of cell common to connective tissue3,4. This means that if one mitochondrial genome is mauled beyond recognition by UV light, moisture, and heat, there are hundreds more copies available for testing.

Another advantage of the mitochondrial genome is that it is circular. While nuclear DNA is a linear molecule, the mtDNA molecule closes in on itself, which makes it hard for molecular scissors to chew it up. Mitochondrial DNA is so resistant to degradation, it is used to identify dinosaurs. It was recently estimated that usable mitochondrial DNA from dinosaur bones may still be present one million years after deposition in a deep frozen environment5.

These benefits of mtDNA might make one ask, “Why do we even bother typing nuclear DNA found in crime scenes?”

First, the size of the usable portion of mtDNA for human identification is quite small. The longer the DNA molecule, the more bases can mutate, the more variability is generated, the more discriminating this DNA molecule becomes. A short DNA sequence has a limited power of discrimination.

Second, while its mutation rate is considered by scientists to be relatively high (much higher than that of the nuclear DNA used in contemporary forensic cases), it is not nearly as high as you may think. Different studies calculating this rate using varied methodologies report one mutation every 30-40 generations or one every 200 generations6,7 (M.D. Coble, personal communication, November 7, 2013). This means that the mtDNA genome is generally transmitted from one generation to the next as is: your mtDNA genome is most probably identical to your mother’s.

Third, a mechanism called “homologous recombination”, which generates a lot of genetic variability during the production of sperm and egg cells, is traditionally thought not to occur within mtDNA in humans. This limits the engenderment of discriminating variation. The reason why “homologous recombination”, which affects nuclear DNA, is not known to occur in mtDNA is that mtDNA is transmitted to children in a peculiar way.

You received your mitochondrial DNA exclusively from your mom. She and all of her siblings, regardless of gender, got it from their mom (your maternal grandmother), and so forth. This is called “matrilineal descent”.  The reason mitochondrial DNA never comes from the father is that the mother’s egg supplies most of the cytoplasmic material (the “egg white”, if you remember) for the embryo. The mitochondria are in the cytoplasm, so virtually none are passed on by the father. As far as conception goes, women supply the all-important egg, they carry the baby to term, they give birth, and they are the sole provider of the baby’s mitochondrial genome, the most numerous DNA molecule in that baby’s body. So, men? We don’t do much.

However, if no nuclear DNA has survived the harsh environmental conditions of a Vietnamese jungle for 40 years, mitochondrial DNA can become a useful piece of the puzzle.

That’s where the Central Identification Laboratory (or CIL) is located. Its mission is to “search for, recover, and identify U.S. personnel missing from past military conflicts”8. To this end, historians and military analysts research individual MIA cases by interviewing foreign and American witnesses, by collecting information from veterans’ organizations, and by sifting through U.S. military records and local newspapers. Once a likely site is identified where the remains might be found, a field investigation team is deployed to that location (often in Southeast Asia) to assess the likelihood of the prediction and the feasibility of an excavation. When given the green light, a recovery team of 10 to 14 people, including a forensic anthropologist, is flown to the site where it will spend 35 to 60 days excavating, calling upon the locals to help in the effort9.

When bone fragments are found, they are sent to CIL Hawai’i where anthropologists try to reconstitute useful information from those bones: sex, age, stature, race, and any trauma or illness that may be shown by the osteological evidence. Similarly, if jaws or individual teeth are found, forensic odontologists examine the evidence and compare their findings to military dental records. In 70% of cases, however, anthropological and dental evidence is not enough: that’s where DNA comes in.

Under sterile conditions, a piece of the recovered bone fragment is sawed off and shipped to a molecular laboratory known as the Armed Forces DNA Identification Laboratory (or AFDIL). Once it has been properly documented, its DNA is extracted and the sample is ready for amplification. You’ll remember the PCR method, which uses small pieces of artificial DNA known as primers to specify which “pages” in this “book” to “photocopy”. The mitochondrial DNA molecule contains a few genes, some of which can be mutated and lead to diseases, like Leber’s optic neuropathy which is a sudden onset of blindness in young adults. These genes are never amplified in the course of forensic work, as they contain potential medical information which would result in difficult ethical conundrums were they unearthed during human identification. Rather, forensic scientists look at the “hypervariable regions”, segments of the mitochondrial DNA genome which do not contain genes but rather a lot of non-coding variation.

Once a profile has been established, it needs to be compared to a reference sample. Unfortunately, the U.S. Armed Forces only started collecting DNA on its service personnel after Operation Desert Storm, in the early 1990s10. For most American soldiers who went missing in action in conflicts older than the Gulf War, no DNA is directly available from military records… but it is available by proxy.

Because mitochondrial DNA goes down the matrilineage mostly unchanged, any relative of a missing serviceman sharing that lineage can contribute his or her DNA as a reference. Indeed, service casualty officers regularly collect skin cells from the mouths of maternal relatives of MIAs which are sent to AFDIL for extraction and sequencing. A DNA match, however, is not inherently proof of identity. Because of the low mutation rate of the mitochondrial genome, it has been estimated that 5% of all military personnel who went missing during the Korean War will be identical in this respect11. A DNA profile is thus one piece of the puzzle which must be completed by the location of the find, details from any wreckage, found objects, pieces of cloth, and witness testimonies.

Mitochondrial DNA: it’s the circle of life (quite literally).

Full disclosure: I have personally done this type of work as I was employed by the Armed Forces DNA Identification Laboratory (AFDIL). Sadly, I was never flown to Hawai’i.

I would like to thank Dr. Michael Coble, formerly of AFDIL and currently employed by the National Institute of Standards and Technology, for clarifying the issue of mtDNA mutation rate, which tends to be quite muddled in the literature. I will be releasing a short companion piece to this article aimed at biologists who are interested in this particular issue.

3 thoughts on “DNA in the Trenches: How Missing Soldiers Get ID’d Decades After Their Deaths”