I have already published a fairly detailed dismissal of the absurd claims of homeopathy on this site. If you are still indulging in homeopathic remedies after reading it, I would urge you to reread it and really concentrate.

There’s a fantastic campaign started three years ago by the Merseyside Skeptics Society in the United Kingdom, the aim of which is to raise awareness of the nature and ludicrousness of homeopathy. The campaign is titled “1023”. It accordingly takes place every year on October 23. One might ask, “Where does that number come from?”

Skimming through the skeptical literature, one cannot help but find multiple references to a scientist named Avogadro and how the preposterous serial dilutions required to generate homeopathic remedies go beyond Avogadro’s limit. The vast majority of these references are ambiguous at best and fail to properly explain the nature of this threshold and why it matters. It would seem that the mere mention of Avogadro’s name should be explanation enough, the chemical equivalent of “because I said so”.

The argument itself is, of course, valid. Allow me the chance to finally explain it.

First, we must talk about moles. 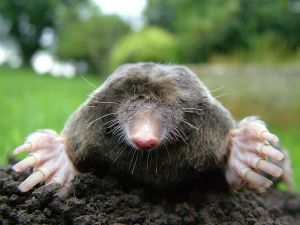 No, not these moles, although some moles may prove useful to medicine (like the naked mole rat which never gets cancer, it would seem).

That number is a pain to write. In order to avoid having to keep an eye on all these zeroes lest one escapes, we can use a trick mathematics taught us, which is to reduce the number to a simple multiplication, 6 X 1023. The “23” exponent indicates the number of zeroes following 6, since we are multiplying 6 by 10 twenty-three times, each multiplication adding a zero to the final number.

So who came up with this absurd quantity? A Frenchman by the name of Jean Perrin, who calculated it from a prediction made by Italian scientist Avogadro. This number represents the number of carbon atoms in 12 grams of carbon. Hence, in 12 grams of the element carbon, one would find exactly 6 X 1023 atoms.

This equivalency plays an important role in chemistry. While we can put a powder or a liquid on a scale and get its mass, we can’t weigh either and get its number of molecules. Knowing that 12 grams of the element carbon—which is made up of six protons, six neutrons, and six electrons—contain exactly one mole of carbon atoms allows chemists to derive from the mass of other substances the corresponding number of molecules.

Fine. One mole equals 6 X 1023 molecules. What does that have to do with the serial dilutions of tea in China?

You will recall the serial dilutions of homeopathy mentioned in the earlier article. “X”s indicated a one-in-ten dilution, such that a product labelled “1X” has had its “active ingredient” diluted once one-in-ten.

Let’s assume that we begin with one mole of this ingredient. We have, in front of us, 12 grams of carbon (not a trivial amount) which we want to dilute homeopathically to make it more potent, as the belief goes.

We do a one-in-ten dilution.

We do another one-in-ten dilution.

We can quickly run down the list, as each dilution robs us of an order of magnitude.

Here’s the interesting part. When you perform the 24X dilution, you are left with a 60% chance of there being a single molecule left of the original ingredient. Maybe you got that molecule in the sample you took from your diluted solution, or maybe that molecule gets left behind as you further dilute your sample. When you have reached 25X, your chances of there being one molecule left decrease to 6%, and it’s all downhill from there.

The popular homeopathic remedy Oscillococcinum is diluted 200C, meaning 400X. I will ask a rhetorical question: do you know how many particles of duck liver are left at the end of this process?

This is why the UK group called their campaign “1023 — Homeopathy: There’s Nothing In It”. Because there really is nothing in it.

My friend Andrew would hit me over the head with an empty beer bottle (an easy enough weapon for him to find) if I did not mention the Merseyside Skeptics Society’s wonderful podcasts: Skeptics with a K, InKredulous, and Be Reasonable. Check ‘em out.