Previously, on The Interrogation of Mr. DNA:

A woman, found dead in her apartment. Our lab rat, Greg, has managed to amplify 13 repeats in both the victim’s sample and an unknown sample, potentially from her murderer. These repeats differ in length between individuals. Can Greg count them and compare them? Will he accomplish this in time? And why will we travel to Alaska to meet a man who can apparently walk through walls? The answers to these questions (and a trip through Rick Santorum’s annals) in the exciting conclusion to The Interrogation of Mr. DNA.

Jell-O is made of gelatin, a form of collagen derived from the skin, bones, and connective tissues of animals such as cows, chickens, and pigs.

Bet you won’t look at that wobbly dessert the same way ever again.

When water is added to this animal byproduct, it forms a colloid that, when mixed with sugar and served cool, is oh-so-good. This colloid or gel looks quite interesting at the microscopic level: indeed, it forms a series of intricate tunnels and pores, kind of like a three-dimensional labyrinth for tiny, tiny worms. Imagine one were to deposit a molecule at one end of this colloid and, somehow, force it to move and make its way to the other end. What would happen?

We don’t need to guess; electrophoresis shows us what happens. Electrophoresis is a technique by which an electrically charged particle moves inside a fluid (like a colloid) according to two competing forces: an electric field and a retardation force created by the resistance of the fluid. If one were to inject a very short piece of DNA at one end of a slab of Jell-O, apply a negative electrical charge at that end and a positive one at the other, this short piece of DNA would start to move through the labyrinthine network of tunnels of the Jell-O because DNA’s backbone is negatively charged. It would be pulled forward by the positive charge at the other end, but it would also be slowed down by trying to find the right path through this cross-linked gel. The bigger the molecule of DNA, the slower it would migrate to the other end of the gel. It is this very property of gels that is used to this day to separate fragments of DNA and measure their exact sizes.

Of course, Greg doesn’t go to the local grocery store to buy Jell-O; the machine he will be using to separate his fragments uses a proprietary gel the main component of which is acrylamide. Though a neurotoxin and a potential carcinogen, it has been the backbone of molecular biology electrophoresis for some time. If it ain’t broken (and not too many people have died from exposure), don’t fix it.

The machine itself is known as a DNA sequencer and, at its core, consists of tiny glass tubing filled with this acrylamide colloid. Each sample to be tested starts its journey at one end of one of these glass tubes. A current is applied and the piece of DNA migrates through this slightly-more-hazardous Jell-O as a function of its size. When it arrives at the end, a picture is taken and the machine calculates its size based on the running times of another sample, a molecular ladder made up of DNA fragments of known sizes. Of course, the camera does not capture the DNA molecule, sweat band in place, crossing the finish line at the nanoscopic scale; rather, each primer that was used to amplify these repeats had attached to it a fluorescent molecule. Since the primer is incorporated into the DNA fragment and since each primer fluoresces in a different colour, all 13 repeats can be differentiated at the finish line. The computer sees a blue molecule, and it deduces that this is the repeat known as D5S818. The computer then sees a green molecule, and it knows this is D21S11, and so forth.

Once the electrophoresis is completed, Greg sits down in front of the computer, opens the analysis software, and looks at what the camera has picked up. The representation takes the form of a long graph. The horizontal axis shows the size of the repeat: the further one moves along this axis, the longer the repeat. On the vertical axis, one sees the intensity of the fluorescence. When that fluorescent piece of DNA finally crosses the path of the camera, a light signal is recorded, which translates to a peak on the graph.

Forensic DNA profile in the form of an electropherogram

Greg can print out the size of each repeat for this sample, which would look something like this: 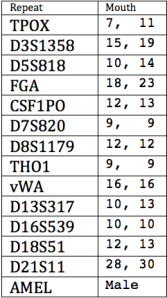 He will then compare it with the profile he got from the victim:

No match. If the DNA on the victim’s mouth was hers, it would bear the same number of repeats at these 13 regions of interest as the DNA found in her blood.

What Greg can now do is run this unknown profile and compare it to the profiles housed in a searchable database. The FBI’s database is known as CODIS and contains DNA from convicted offenders, missing or unidentified persons, and from biological material found at crime scenes.

Much to his displeasure, Greg cannot get a hit in CODIS. The blood around the victim’s mouth belongs to someone whose DNA profile has not been uploaded to this repository.

Forensic scientists are by no means the be-all-and-all of a criminal investigation. While Greg did his part to move the case forward, it is now up to police detectives to identify a suspect, arrest him, and bring a sample of his DNA to Greg so that the whole process of extraction, amplification, and detection can start again.

In the case that interests us, there was no match to the unknown DNA sample in the federal repository. In a more interesting case dating back a few years, there was a clean match. The DNA belonged to a man who had been in prison at the time of the crime.

Escapology, or the performing art in which the artist must release him- or herself from restraints and other methods of containment, has fascinated the public over the ages. But did Houdini ever escape from a jail cell, commit a crime, then walk back into his cell, leaving no trace of his daring emancipation?

A case that was reported in 2005 seems at first glance to give weight to this incredible hypothesis. Investigation of a sexual assault in Alaska yielded a semen sample, the DNA profile from which was run through the database.

A known criminal, currently behind bars and definitely in prison at the time of the assault.

Our pop cultural exposure will help determine the wildness of our imagination’s run. Was the Alaskan police force faced with a man who could alter the molecular structure of his body to walk through walls, or a well-connected man whose correctional officers let him out one night to settle a score?

Readers with fantasy prone personalities might want to preserve the illusion of superhuman abilities, claiming reality is too boring to live in. Our universe, however, is richer and more fantastic than what many of us can imagine.

While the forensic scientists were baffled, the detectives identified their prime suspect and brought him in. A DNA sample was tested. Same profile.

How can two individuals (in the same state, no less) possess an identical DNA profile at 13 separate regions of interest? Well, the odds are fantastically small but not quite impossible.

However, the twist came when the investigators noticed that both their prime suspect and the man in prison whose DNA had been found on the victim shared a surname.

Interviews with friends and relatives of the two men revealed they were indeed brothers.

But hold on a minute. Do brothers have identical genomes? No, they do not.

Let’s look at the copulating habits and genetic make-up of an examplar family. I bring forth the family tree of birth-control-opposing, Palestinian-denying, homosexuality-and-man-on-dog-sex-equating conservative former U.S. President hopeful Rick Santorum. Who ever said evidence-deniers had no role to play in science education?

Rick was conceived when a sperm cell from his father, Aldo, met the egg cell of his mother, Catherine, in a dark, dank place. Rick’s entire genome, all 23 pairs of chromosomes (assuming he is not the victim of a severe chromosomal abnormality, such as a trisomy), comes from his mom and dad in a 50:50 ratio. For each pair of chromosome he possesses, one chromosome is Aldo’s, the other is Catherine’s. You can imagine a brain cell of Rick’s with, inside, a little blue chromosome 1 (Aldo’s) next to a little pink chromosome 1 (Catherine’s).

Years later, Rick and his wife, Karen, made love (presumably in the Missionary position). One of Rick’s many sperm cells fused to an egg cell of Karen’s, and the result was Elizabeth Anne. For each pair of chromosome she possesses, one chromosome is Rick’s, the other is Karen’s. Of Rick’s chromosomes, some will be Aldo’s, others’ will be Catherine’s. Genetic lottery.

This means that siblings, conceived in one sexual position or another, will not be genetically identical to each other. They will share, on average, half of their DNA.

Returning to our main story, it is not enough to say the man in jail and the prime suspect were brothers. We would expect roughly half of their tested repeats to differ. How did the jailed man’s semen end up at the crime scene? The answer may surprise you.

Medical records were not available to the Alaskan law enforcement officers; however, while interviewing relatives and friends of the two men, they learned that the brother who was suspected of the sexual assault had donated bone marrow to his now-jailed brother. At the time, such a transplant required a de facto destruction of the recipient’s entire marrow, responsible for making blood cells.

Brother A commits a crime. He is arrested and blood is drawn. DNA from his blood is profiled and kept in a repository; however, it is not the DNA he received at conception.

Later, Brother B commits a sexual assault. The semen is profiled: the same DNA is found.

The scientist who reported this case in 2005, Abirami Chidambaram of the Alaska State Scientific Crime Detection Laboratory in Anchorage, was making the point that, without police access to medical records, these miscarriages of justice could happen and have sometimes lethal consequences on the wrong people1,2.

Brother A had become a genetic chimera. Like the creature of Greek mythology, he had bits and parts from two different individuals. The DNA in most of his tissues was his, but the DNA flowing through his veins was his brother’s.

One may think these cases exceptional, but recent scientific discoveries seem to indicate that a significant fraction of the population may be chimeric3. Women who have been pregnant seem particularly predisposed to this phenomenon, in that fetal cells seemingly stay behind. What does this mean for the practice of forensic biology?

A lot of headaches, discussions, and demands for more funding.

Greg is in desperate need of alcohol.

If you are interested to know more about the mathematics of DNA matches (what are the odds it was someone else’s DNA? What does 1 in 2 million mean?), I suggest reading this article.

2 thoughts on “The Interrogation of Mr. DNA, Part 3 of 3: Detection”